I remember faintly hearing terms like “conservative”, “liberal” and “communist” at the young age of 8 years old, not knowing what the Hell any of it meant. I literally remember thinking that Political Parties were actual parties where politicians would go and dance and drink the night away. As silly as it is, who can blame me? I was small and naive with no one to tell me what any of this was. It was only when I was 12 when I grew curious and looked into it myself, and ever since then I’ve been independently educating myself. But, just because no one educated me doesn’t mean that no one has to educate you. Political parties or “isms” are varying ideologies in the area of politics and economics, and we’re divided into hundreds of groups based on our beliefs. Don’t worry, today we’ll only be exploring 13.

Let’s get into it!

Over here to the left is the Political Compass, and this depicts where different political parties stand both socially and economically. We’ll be using this guy to help us define these political-isms, and develop a better understanding of where they and you belong. Let’s go from left to right! 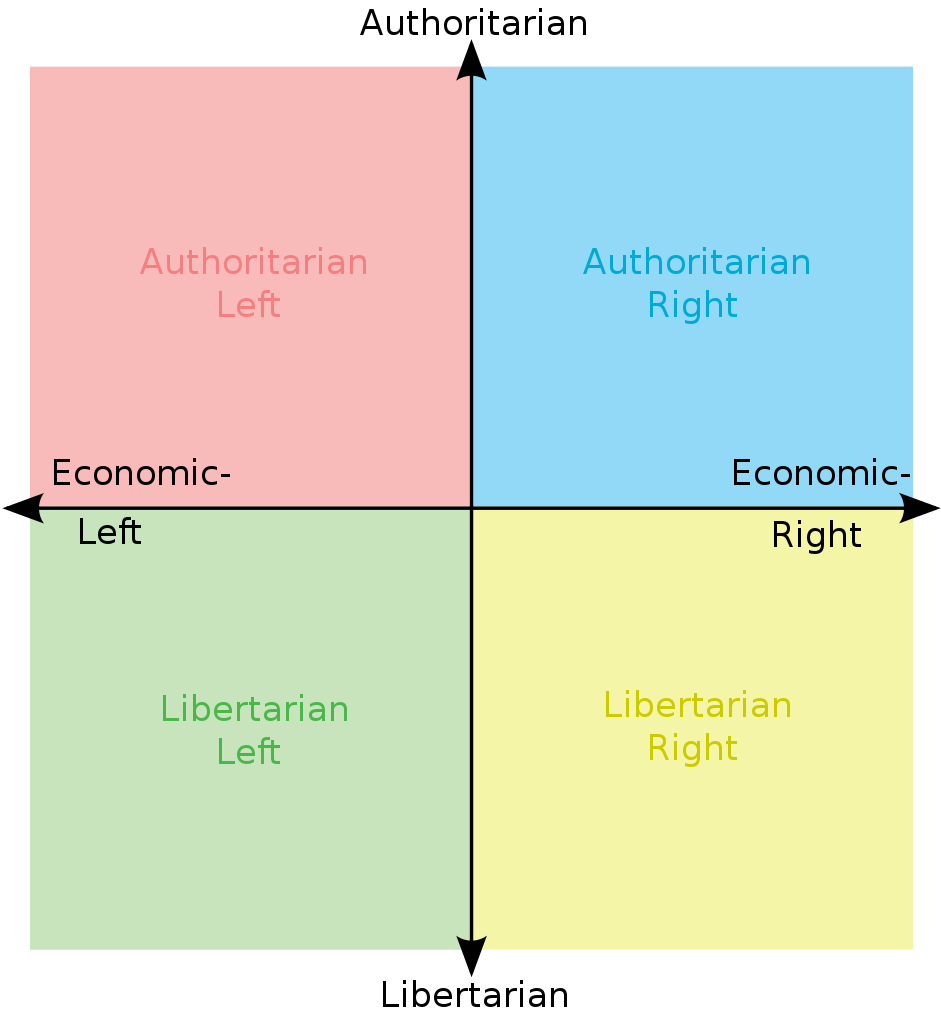 Communism: You know the weird WWII kids in your history class that blabber about communism and “Mother Russia”? Marxism is what they’ve been on about – In the 19th century, Karl Marx developed the idea (Marxism) of establishing a new society through a revolution to implement a new classless society, and a reformed government that is responsible for providing every resident equally. This nowadays is called communism, and it promotes the idea that production is publicly owned by the state as a whole, and also attempts to abolish the hierarchy through eliminating social classes (e.g. the rich and the poor) – and this is done through an authoritarian (dictatorship) state. A famous example of a communist leader is Josef Stalin of the USSR that was established prior to WWI in 1922 after the Russians overthrew their monarchist, classist government (post-February Revolution), and later dissolved in 1991. Other examples of once or current-communist countries include China, North Korea, Afghanistan, Bosinia, and more..

Socialism: Think of socialism like a toned-down form of communism. Derived from Karl Marx (again), it is based on the public/collective ownership of production in order to satisfy human needs. Unlike communism, it focuses more on equality rather than removing classes and their privileges as a whole through democracy, not authoritarianism (dictatorships). Bernie Sanders of the USA and Anker Jørgensen of Denmark are examples of socialist politicians that promise equality in terms of rights, finance, pay, and more. You will find the government providing all the bare minimums such as healthcare, housing, jobs, etc. to the people by default, but this itself can cause some issues.

Liberalism: Us liberals have a sort of love-hate relationship with the government you see, we can agree that we need one, but also argue that it poses a threat to the equality and liberty we strive for. Consider it as western culture – liberals nowadays are pro-choice, pro-lgbt, BLM, feminists, environmentalists, F-Trump, and everything in that sort of genre. We rely on the market (buy-and-sell typa thing) for economic decisions, and parliaments for political decisions, yet we still have a say in all of what’s going on. This makes us socialist for the most part because we favor government intervention in the economy, however there can be capitalist liberals but we call them libertarians, but don’t worry we’ll get to that later. Anyway, liberals also believe in taxes (different rates depending on your income) in order to provide education, healthcare, housing, and other necessities for the people. Basically, liberals = democrats, so think of politicians such as John F. Kennedy, Hillary Clinton, Barack Obama, and you’ll have a clearer picture of the liberal promises.

Environmentalism: It’s in the name, environmentalism is all about protecting the environment from mankind’s harm. In fact, Leonardo DiCaprio himself is a famous example, and he vouches (just like all others of this political-ism) to put an end to illegal logging, use of fuel cars, illegal fishing, deforestation, exploiting animals, etc. This is a sub-political party that is often found woven in liberalism, but can affiliate with any political party.

Feminism: The famous feminists, you already know it. We feminists promote ideologies that create the social, economic, political and personal equality of men and women in order for the both of us to be provided with equal opportunities and rights. Read that again, twice, or even thrice if you need to. This means equal pay, more women in the workplace longer maternity leaves, bringing more attention to rape, being pro-choice, and generally empowering women after their centuries of silence. Men also have a large role in feminism because we also vouch for their voices to be heard in topics such as sexual assault, rape, emotions, etc. As a whole, we want to abolish whoever in Hell created the shitty idea of gender roles (checkmate, conservatives!). Emma Watson, Malala, Oprah Winfrey and myself are a couple of examples of feminists.

Centrism: This party here stands right in the middle of the political battlefield, and they’re also known as moderates. These guys are just the spectators of the boxing match, in simple terms. Centrism is all about affiliating with both left and right wing – they believe in equality, but not too much, they still find a need for a social hierarchy. They agree with publicly controlled economies to an extent, but still want private markets and government intervention. Simply, blend conservatives, capitalists, liberals and socialists into one and you’ll get this dude over here. Indecisive-looking-ass political party to me – just pick a side!

Populism: Populists are like the gucci-version of centrists, in simple terms. Ideally, they represent the people and what they want rather than the voice of corrupt politicians (no shade). If populism was a person, they’d be the type of guy to stick up for you if someone made fun of you in class. They quite fancy publicly shading big, corrupt companies. They like a mix of both capitalism and communism, liberalism and conservatism, with a spice of centrism in general. An example of a populist is Gamel Abdel Nasser of Egypt. It can come in both democratic or authoritarian forms… So just centrism, but make it a little spicier.

Conservatism: This is the part where Mr. Turnip 2020 and his cult of trumpets come in. Conservatives, founded by Richard Hooker, are Liberals’ worst nightmare. They’re both around the same place on the spectrum, but polar opposites at the same time. These dudes are for pro-life, lgbt ‘tolerance’, ALM, misogynistic, F Biden assholes. Conservatives are quite the pragmatic party, they’re traditional and don’t like changing the way they do things (unless necessary) – hence why they’re called conservative. They respect and support religious institutions, lack of government intervention in the market, and ownerships of private firms. Not only that, but they like lowered taxes, specifically for the rich, per the capitalist pig status quo anyway. They strive for individual control of production – contrary to socialism and liberalism.

Capitalism: This is the economic form most favored by the conservatives for the following reasons – capitalism is the economic system where production and trade of a country are controlled by private owners for the sake of profit rather than the state itself. Hence, this is what makes the famous motto: The rich get richer, the poor get poorer what it is, because that’s a summary of what this political-ism is. It strives for the benefit of the individual themselves  – greed – and specifically those who are wealthy because it helps them become wealthier. Spoiler alert: the poor get poorer. Examples of capitalist countries are the USA (No big surprise) and the United Kingdom.

Libertarianism: Don’t confuse this with liberalism, they’re a little different. They do have social similarities such as opposing military intervention, open borders, decriminalizing drugs, equal rights, etc. because liberals and libertarians are almost identical – except for when it comes to the economy. They believe in free-market capitalism, so there is barely any intervention in the market. In simple terms, the production of goods is not collectively owned by the state, but rather by private firms and companies for their own benefit. Basically, they’re just liberals, but capitalist instead.

Nationalism: Are you familiar with those Arab boys who spam their corrupt country’s flag in their bio with weird emoji combinations? Those are the nationalists, the group of people who are overly biased to their own country and think it’s superior to every other state on this planet. Nationalists have great pride in their country, its history, ruling government/family, achievements and more. Well, this can be good and bad depending on the country, but I’ll leave that to you to decide. Examples of nationalist leaders include almost every dictator to breathe like Adolf Hitler, as well as regular (former and current) leaders such as Yasser Arafat of Palestine, Golda Meir of Israel (ew), Michael Collins of Ireland, and more.

Fascism: The infamous Adolf Hitler himself was a fascist – just like all others of this party, they believe in a government system that is led by a dictator (single ruler with total control over a country/state) and controlled through force and fear. Fascist governments have complete control over the economy in terms of production, trade, commerce, etc. Completely opposed to communism, they believe in the creation of a hierarchy and social classes in order to promote the excellence of the higher class which creates racism in the system too. Not to mention – these guys are the biggest nationalists around, constantly having parades about their state and murderous dictators. An obvious example is Adolf Hitler of Nazi Germany, where he believed in the superiority of the Aryans (white individuals with blonde hair and blue eyes), and the degrading of the Jews – and similar beliefs is what make fascist.

Anarchism: Anarchy is basically abolishing the government, the state and the economy and having it run by the people instead. Absurd, I know, I don’t fancy it either, but let me explain. One of the first public anarchists was Pierre-Joseph Proudhon of France, and he wanted to completely abolish the government and reform it as people-run. They believe in a citizen ruled society, abolishment of the hierarchy, and complete economic equality. Yes, it sounds utopian, but it is not only super unrealistic, but it would also end up in absolute destruction.

Well, that was a long one… these are only 13 of the hundreds of political and economic philosophies and parties dwelling in the world today, but they are the main ones we should at least know about. As diverse as the political spectrum and compass may be, these can help you begin to classify where you stand in this field, can’t it?

Personally, I’m a liberal socialist with a strong dislike for centrists and conservatives (obviously). But the real question is, after reading this, what political-ism are you?

One thought on “13 Political -isms Everyone Needs to Know”