One of my favorite past times? Disproving old beliefs that have no place in our modern world. (Even if that means disproving what my parents are saying, oops?) So, this week’s dose of controversy? Period myths our mamas, actually no, the whole world, told us were true but, spoiler alert, aren’t.

The whole “PMSing makes women angry and annoyed” thing is a bust. This is one of those myths that really piss me off, because what this essentially does is just invalidate women’s feelings and actions as “a result of being on her period.”

While some women do experience PMS, let’s talk about relevant facts. What is PMSing? PMS is feeling emotional, but mostly physical symptoms before (but can last up to 4 days) into the menstrual cycle, short for Premenstrual Syndrome, and up to 4 in 5 women, experience some sort of PMS.

Anyway, you see that bold part? Only a small percentage of women feel severe emotional changes during PMSing, as in, all that bullshit about ignoring women cause they’re “crazy” or “depressed” during their period, is well… bullshit. Most PMS symptoms include; tender breasts, bloating, cramps, headaches and appetite changes. Does that mean women don’t experience emotional changes? They do, it’s just unlikely and it usually doesn’t affect their day-to-day life. Only about 5% of childbearing-aged women experience severe forms of PMS, called PMDD, which is characterised by those said mood swings and such. No one will be going Godzilla on you if you don’t get them food. Believe me, that really isn’t probable.

Now, let’s talk about the women that are most likely to get PMS in the first place. Women who have high levels of stress (makes sense right? But guess what? Emotional and physical changes due to stress? Happens to both genders.) And women who have a family history of depression or a personal history of depression (again, same as before, if you have/ had depression, it’s likely you’ll experience emotional or physical changes, not a big deal.)

So, how about, we stop trying to find reasons to degrade women’s existences by the tiniest things they may or may not do, and try to find ways to help everyone on this earth be healthy and happy, regardless of gender.

While we’re at it; the myth that menstrual discharge is only blood is false. Menstrual discharge includes; blood, endometrial (the lining of the uterus) tissue and fluid, cervical and vaginal mucosa, amongst other things. Blood is actually only a small proportion of what people menstruate, about 35%.

So what essentially happens during menstruation is that the cells of the uterine lining, which are normally supplied with blood from nearby arteries, stop getting blood and so, they die (no blood = no oxygen for the cells to live). So what do we bleed? The accumulated blood in the nearest tissue that has nowhere to go, because the cells it supplies oxygen for are dead. In simple terms, the blood component in the menstrual discharge is blood from arteries…

The same blood you bleed if you cut your finger… 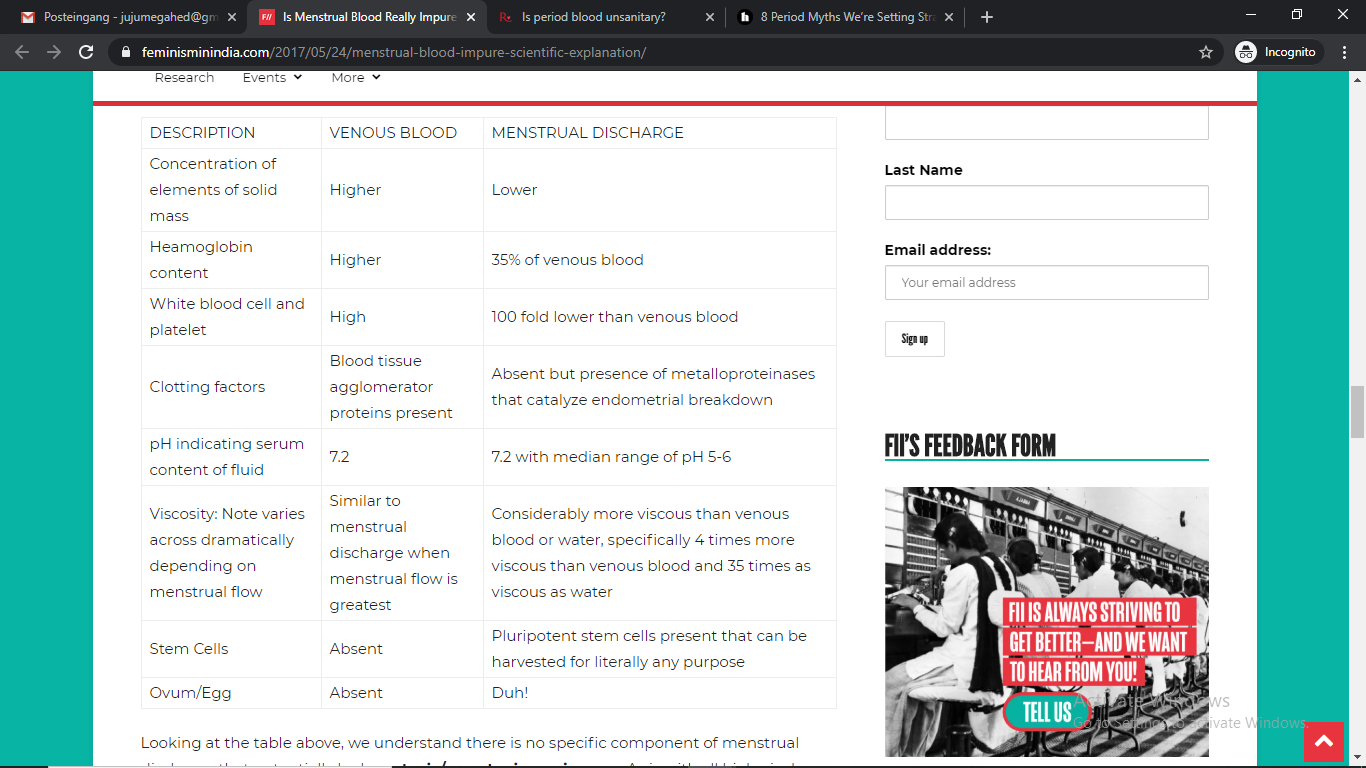 And one of the weirdest that I’ve heard yet,

And there are so many more, different in every community, but all equally absurd and sickening. Please read and do your research before believing what those around you say.