By: Rawan and Hanya

The 62nd Annual Grammys are a big deal, it’s the one day where various artists from the music industry come together for awards. The Grammys are a night of music, fashion and probably lots of drinks. Oh, just so we’re all clear, the Grammys basically recognize the best of the best in 84 different musical categories. This year hosting for the second time consecutively was Alicia Keys and we’re not pissed about it obviously, she’s a fucking Queen. She gave a heartfelt opening speech that gave us all chills followed by a musical melody where she dropped in the names of the biggest artists in the music industry right now.

Anyway, here is a best dressed list from last night!

We have to start by giving our host some love. Alicia Keys is a goddamn queen and she knows it. She styled her hair beautifully and wore a sleek silver dress that made her shine more than the dress itself did. In other words, she looked statuesque glittering in Atelier Versace.

As much as I hate to admit it, because I don’t see her as much, Ariana looked like a literal Goddess in that gray gown of hers. I never knew gray could ever look that good to be honest. That’s Hanya speaking – Rawan loves to say that Ariana looked so cute in all the fluff. 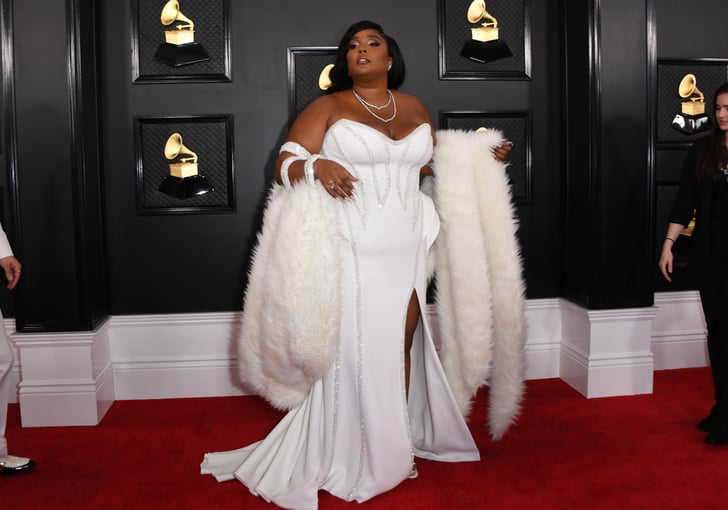 Let me just say Lizzo does not come to play. She was the belle of the ball. The powerhouse of the stage. She walked the red carpet in an angelic all white Atelier Versace gown. But, it’s Lizzo and the pure Hollywood glam did not stop there as she left us floored in her performance dress – we have no words.

I think I can confidently say Maggie Rogers was starlit; she wore a simple but incredibly gorgeous dress with grace and minimalism. I’ve fallen head over heels for this entire look.

Chrissy Teigan and John Legend are a power couple and they’ll forever be known as that. I loved John’s slightly long and flare-out blazer but Chrissy looked like she quickly chucked on a keesa samra. Eh…sorry love.

Note: it’s Rawan and I disagree – Chrissy looked so hot in that orange gown it left me gasping.

Lana’s got an A in the hair and make up departments, which were very well suited with her long sparkly silver dress.

Hanya argues the zig-zag ruined it – it’s a matter of perspectives ladies and gents but nonetheless she still looked fantastic.

DUA LIPA. OMG. DUA LIPA. I am in love. Looking at her knocked the breath right out of my lungs; with her sleek silk 90’s two piece set. Also, the eyeshadow and hair are so on point. This is too perfect.

Shawn took a page out of Timothée Chalamet’s book and hit the red carpet with this beautiful magenta suit. We’re in loveeeee.

Camilla Cabello’s look was dark and steamy!! Bangs also suit her and she looks adorable with them which is a great contrast block between the rage and sexiness of her entire look. Which is the façade and which is the real Cam? We still don’t know. She’s probably both though.

The couple that never disappoints. We genuinely don’t know who’s the better dressed: Sophie or Joe. We loved the bomber jacket and are dead at how smoky Sophie looks.

LIL NAS X is yet to disappoint us on a red carpet. An all pink look definitely made him standout. Also could we have a moment of silence for this iconic duo.

Billie’s green phase is still on and she brought it to the Grammys in her beautiful Gucci green sparkly suit that matched her hair. We are here for it, tbh.

We have to pay tribute to this beautiful one-shoulder nude gown. The simplicity left us in awe of her. Also, can we talk about the shoes? They’re gorgeous.

Jameela Jamil rocks her Dennis Basso dress with an overall case of monochrome. She matches her gorgeous indigo gown with sparkling eyeshadow of the same hue. We totally love it. It suits her.

Boss bitch! Bebe Rexha was fire and that’s all I can say! Dressed in an all black unique pantsuit was different, elegant, and so fucking badass I just can’t. Also her hair! hella heart eyes you guys.

A look that speaks for itself – the red gown paired with the red sandal heels is one to die for. She is such a cutie. Awh.

As Alicia Keys said: Rosalia is hot – or at least we think that’s what she said because honestly it’s all we can think looking at her red carpet look from last night.

I think I enjoyed Grace Elizabeth the most, she looked so sexy, alluring, and sensual in her draped diamond dress. A more fresh look for the Grammys, which I am absolutely living for.

I am so in love with Gwen Stefani, it’s insane. Can you blame me when she arrives on red carpets looking this fine? Her dress was embroidered with shells her boyfriend Blake Shelton collected and quite ironically it was a bridal color shade. She paired the stunning dress with those beautiful nude boots ever and I want a pair. We stan.

Demi, Demi, Demi. I’m absolutely speechless. Her vocals are surreal, her makeup was waterproof which was essential considering her heartfelt and insanely emotional performance, her gown. She looked like an Heiress from a Shakespeare book. A warrior. I have no words.