“It’s gonna be too late, too soon, so let’s do something about it now, before we lose control” – Short Mo

Our generation is one that lacks a sense of self. We’ve been socialized to think we’re useless, worthless, and hopeless. Society has convinced us all that our opinion doesn’t matter, that only our grades and weight are measurements of success, and that our passions are unimportant. We grew up being told to study and get good grades, to play a sport and be the best at it, but did society ever tell us to find what we’re good at it and what we love? Never. We’ve always been silenced by oppression, culturization, and fear, we’ve yet to get up, we’ve yet to realize our power, we’ve yet to express ourselves. Or so you think.

Countless of our Egyptian youth are scared of speaking up, scared of talking about our everyday issues, scared of what lies behind the blindfold – yes we are scared of the light – but not Short Mo. Short Mo, aka, Mohamed Al Ahwal, is your ordinary 16 year old Egyptian student who is currently attending his last year of school at Modern English School. What could possibly set Short Mo apart from everyone else though? What makes him so special? Rather simply, he isn’t afraid of the light. 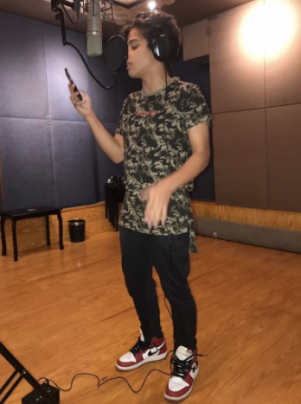 Rap. That one word could ignite a million emotions inside of that boy, but mostly, it ignites a fire deep in his soul. Short Mo has managed to find something he’s good at and something he’s passionate about, once he merged both of them? Well, refer to his SoundCould and you’ll see for yourself. Short Mo believes truly and wholly in rap as a form of self expression, a specific genre of music existing for the purpose of talking about one’s pain, issues, and feelings. Thus, he dedicates his own rap to the cause, he dedicates it to combating society’s endless list of “obligations”, its standards, and its desire for “perfection”. One of the things that also make him so special is how raw and real he is, his rap is free of any and all forms of discrimination

“I rap because a lot of others in society have the same issues and thoughts that run through my head but don’t have the skill or the courage to express them”. His new mixtape is currently in the making, set to be released quite soon, but a track – Al Qaseer –  came out just over a week ago – and honestly? It’s quite lit. Most people think it’s his best one yet, which sets a high bar of expectations for his mixtape, though we have faith in the up and coming rapper.

We’re looking forward to the release of “My Perspective”, pretty sure it’ll be fire. Short Mo is a name to be remembered, kid’s going places, especially with a vision so clear, a purpose so true, and a passion so strong. For now, we’ll stay tuned for more lit tracks.

One thought on “Short Mo: Countering Society Through Rap”